Hanoi
Flying in over a winter brown scene of flat country, seeing beauty in the many small cultivated fields and in the order of the place—tidy, red-roofed villages.

In the Hanoi airport, we notice advertising on the exit doors and find the irony large:  Amway.

It takes nearly an hour to reach the old city; the roads are good. It gives us a chance to see different parts of town, different neighborhoods. Perhaps property is taxed based on the width of buildings because there are lots of skinny buildings, 3 or 4 story ones looking odd with a one story or an empty lot adjacent.

We had only a very short time in VietNam—two nights and a day.  We will certainly want to come back as there is much to see, especially along the coast and in the south.  But son Ben tries to visit two new countries each year (getting harder as he nears 50!) and we aim to please… 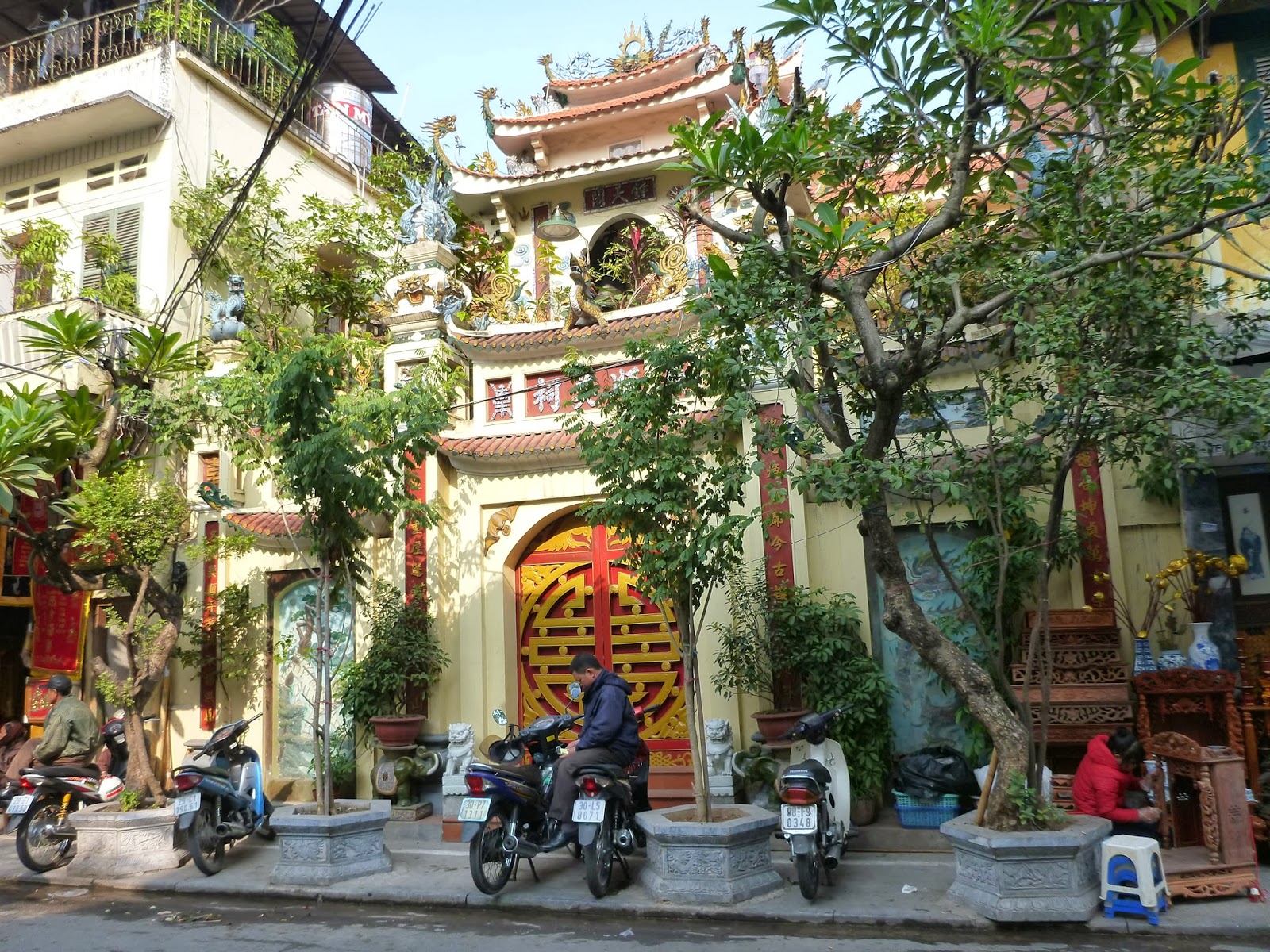 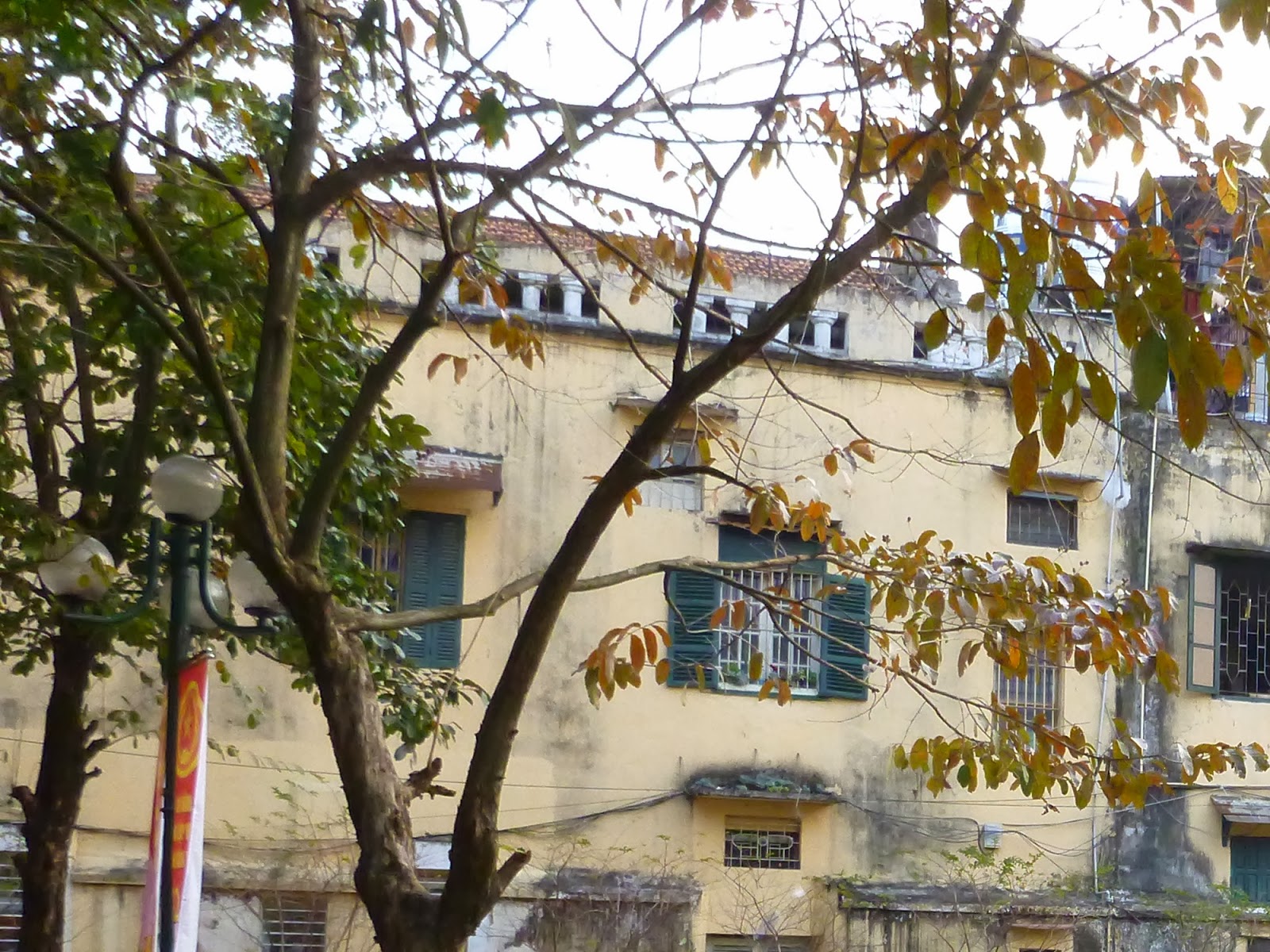 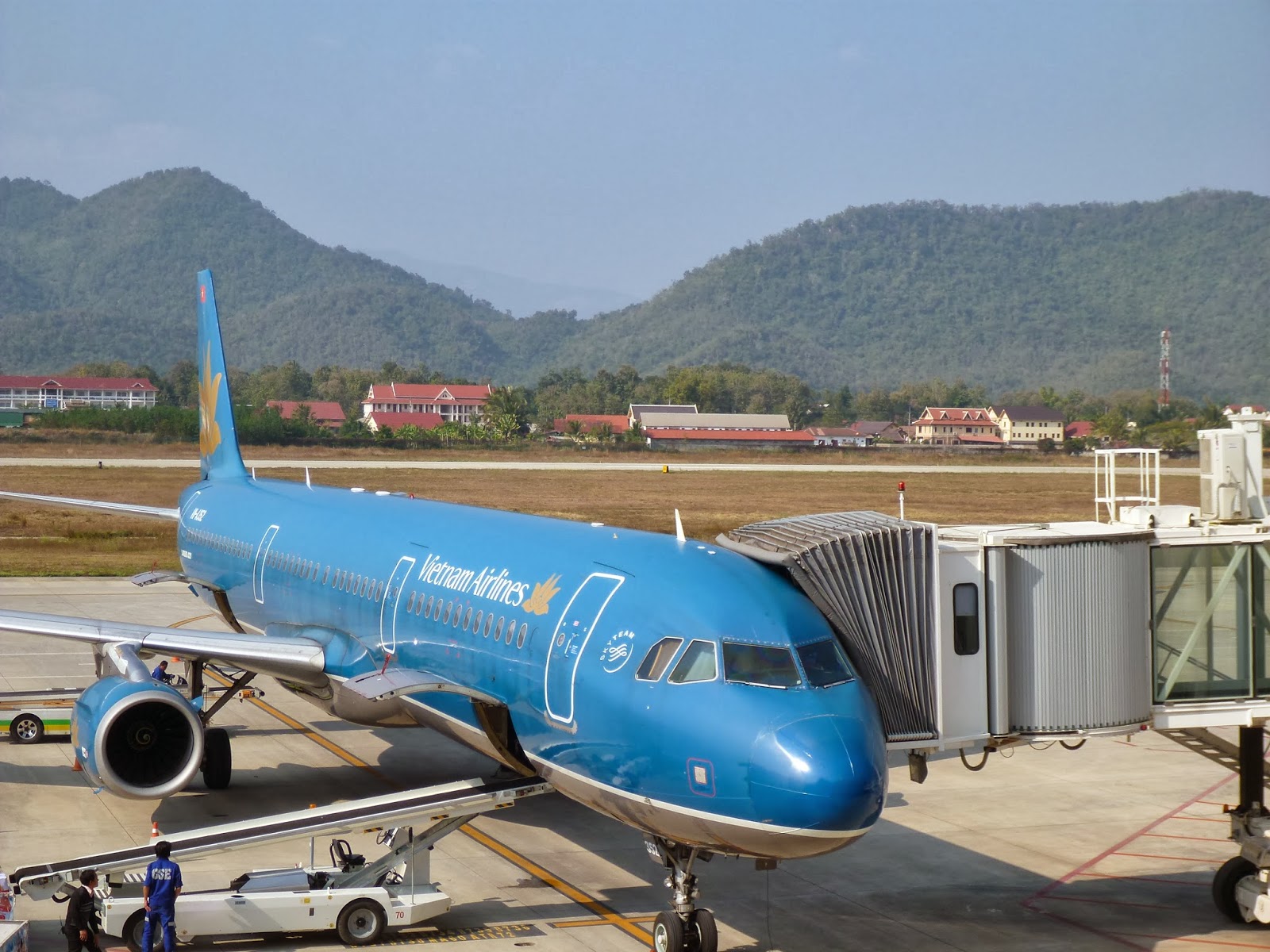 where we rendezvous-ed with Cam, albeit a day late thanks to Lao Airlines cancelling his onward flight from Bangkok (he had made New York- Hong Kong via Vancouver, then Hong Kong to Bangkok without incident, but the last few hundred miles proved elusive). Such joy seeing him walk in the door. Together for Christmas--Yay! 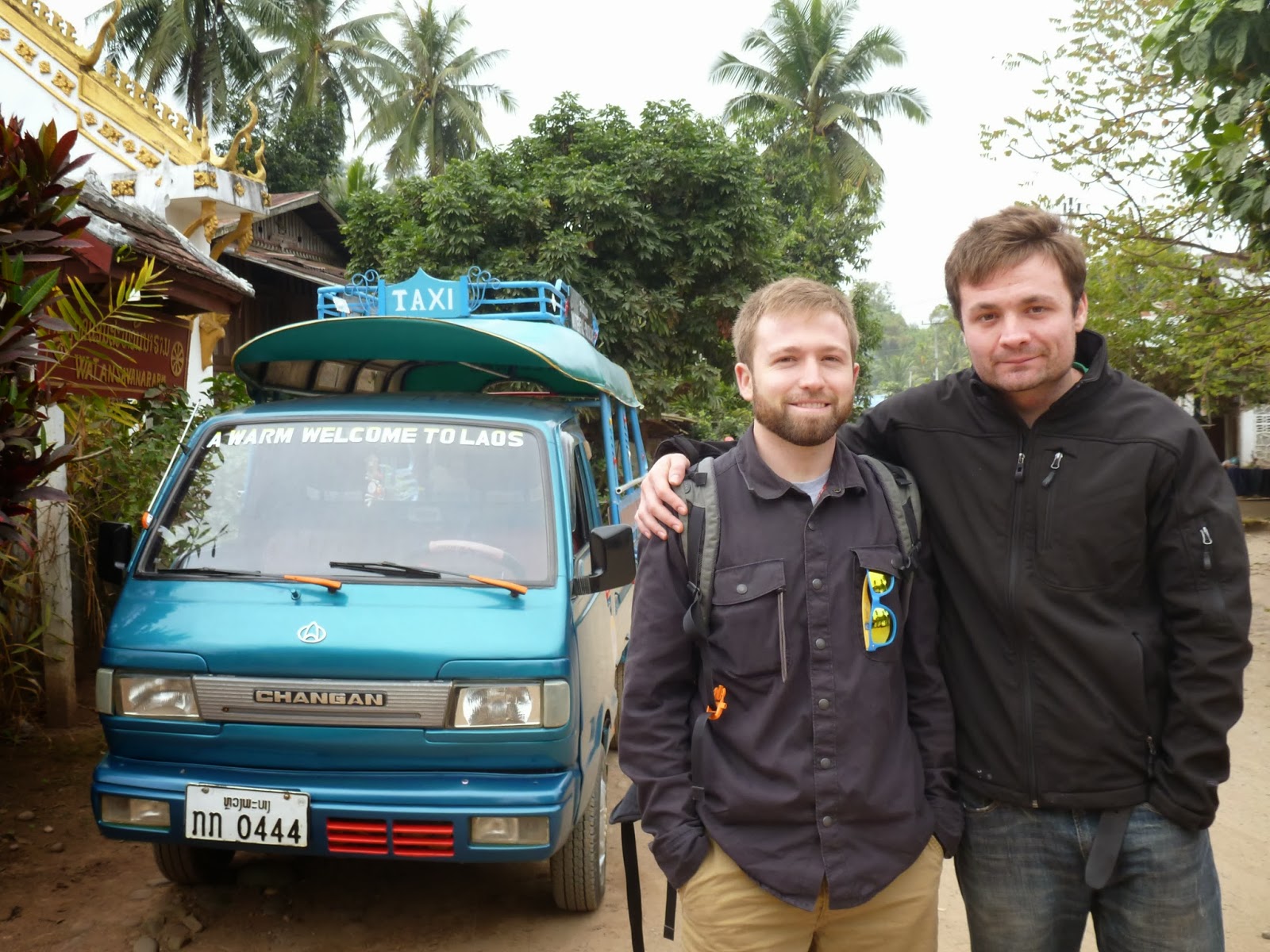 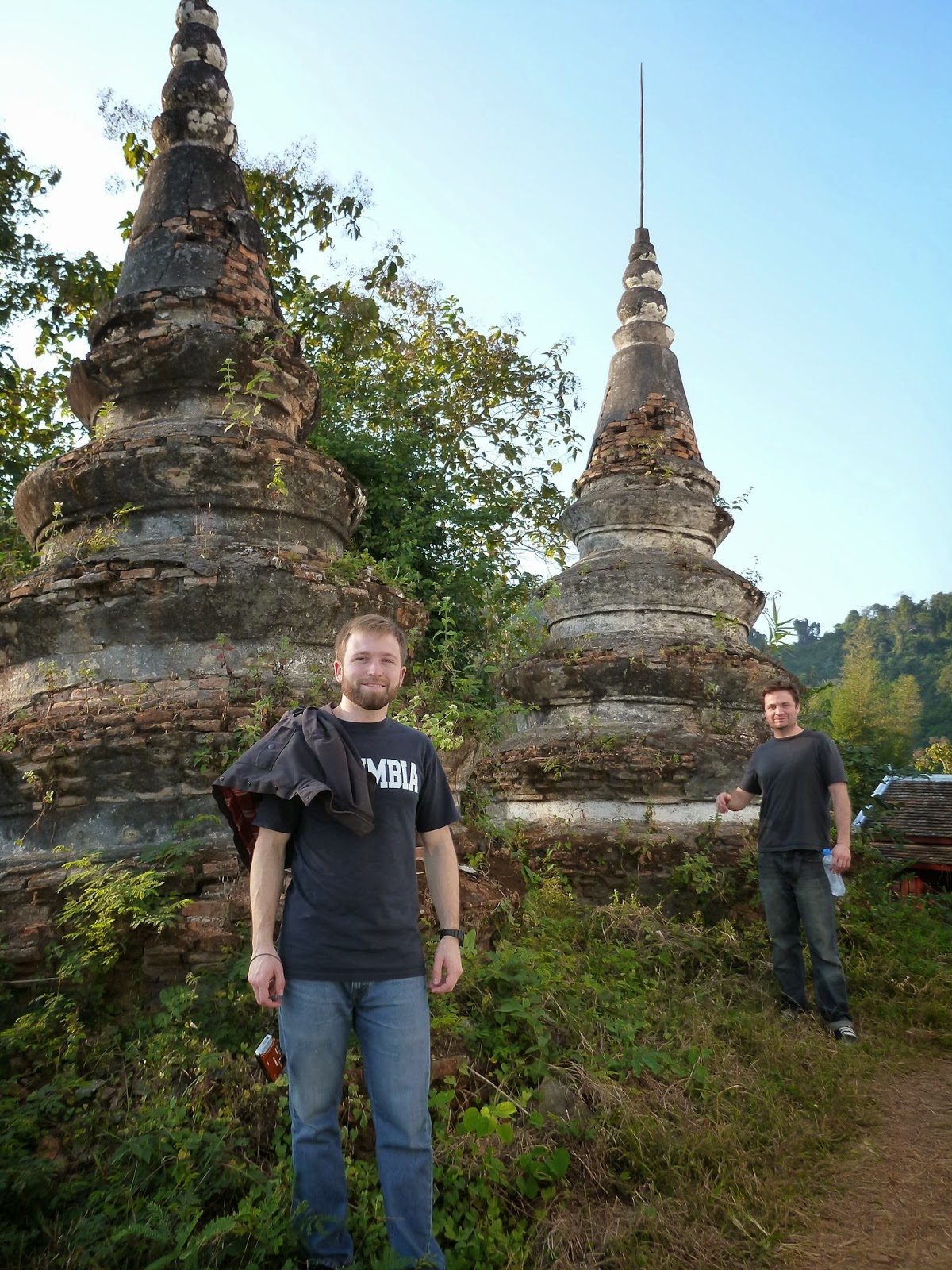 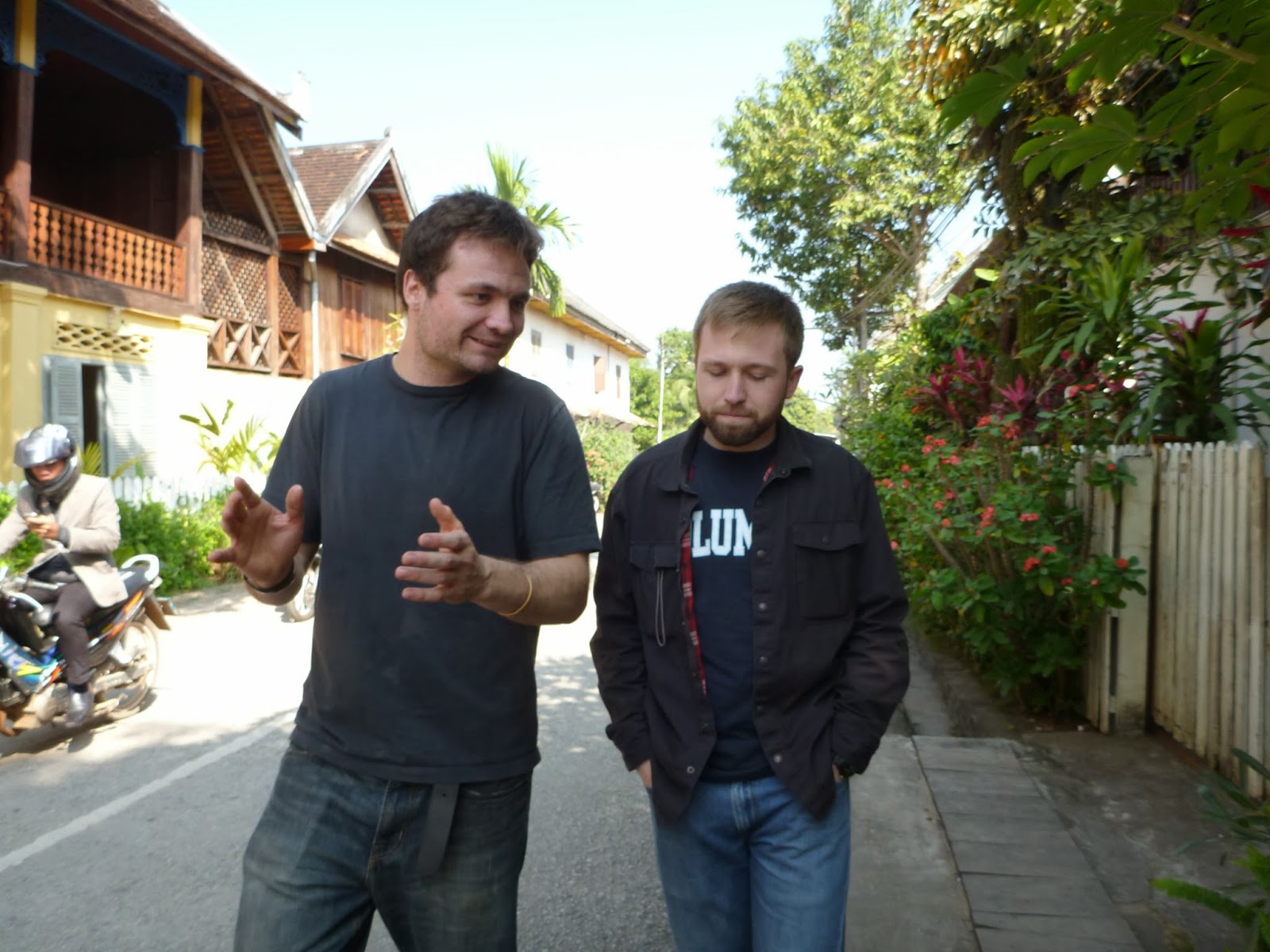 We did a short Mekong cruise at sunset, and explored several temples in the area.  On Christmas Eve Ben treated the fam to an excellent zipline adventure, fulfilling a dream of K’s.  There were 20 lines in all, four or five of them heart-stopping vertical drops. 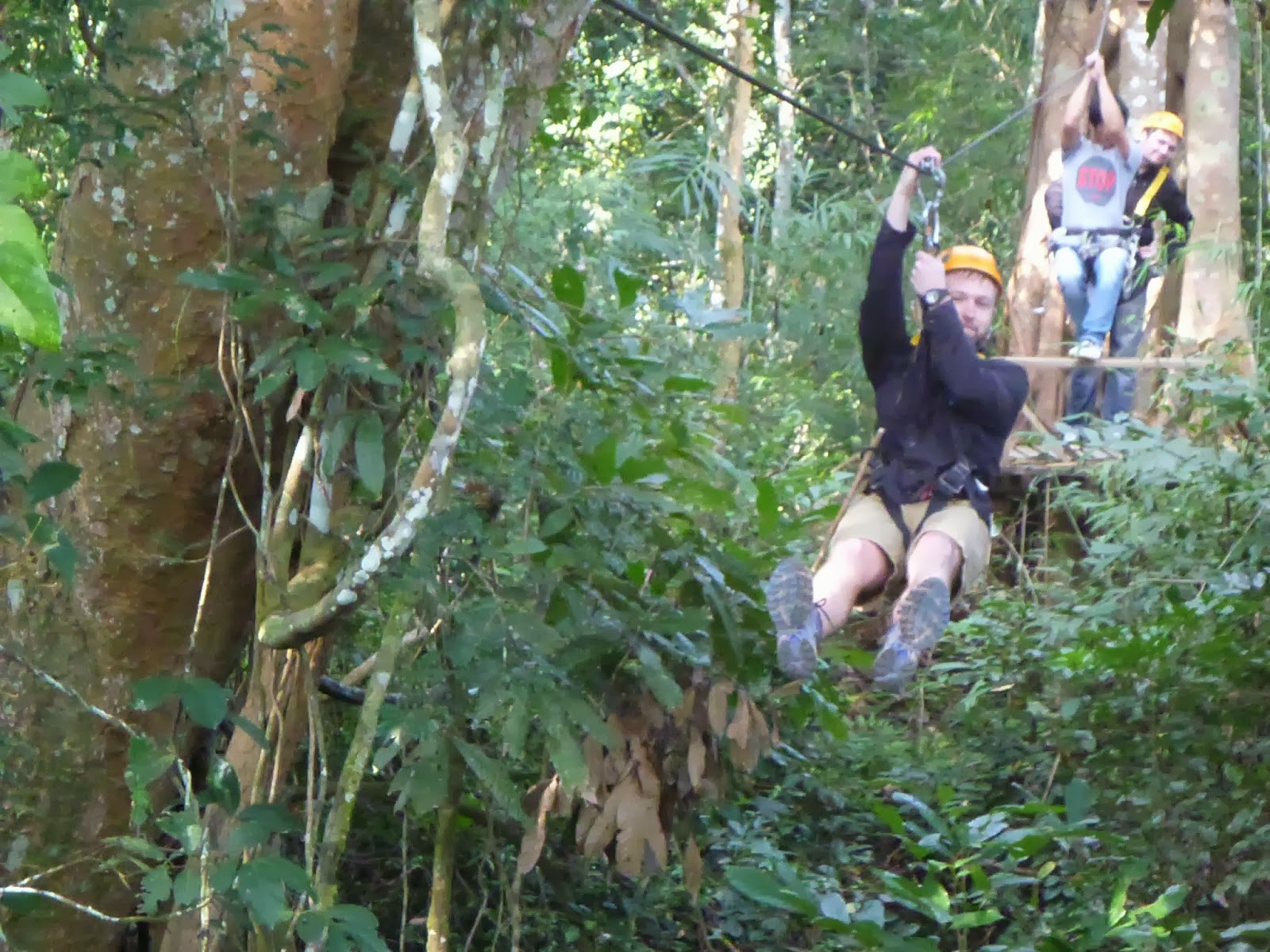 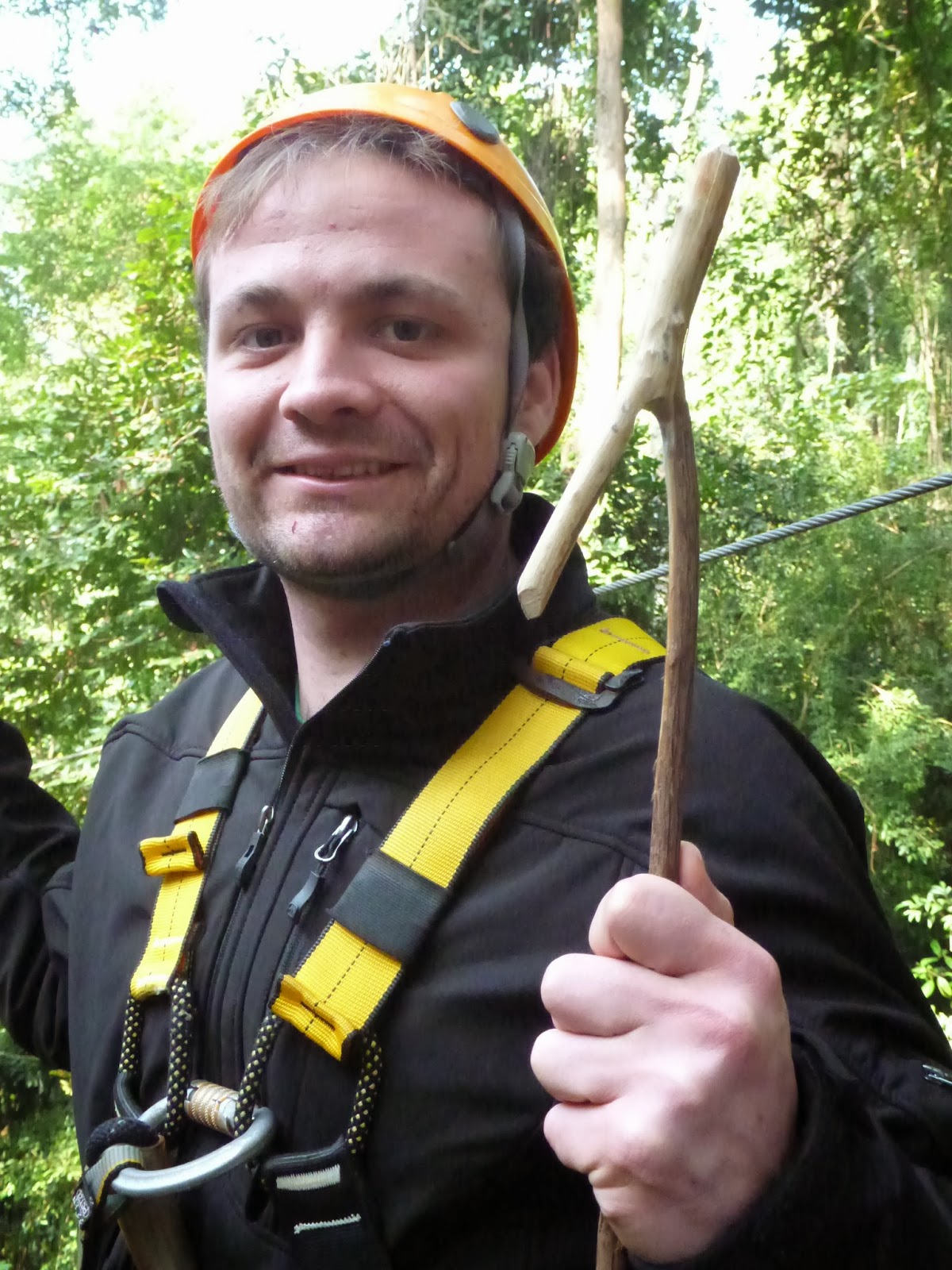 The lines were in a lush jungle environment near and sometimes over a series of terraced waterfalls. At one point we passed right over some tourists who were riding elephants through the shallow water. 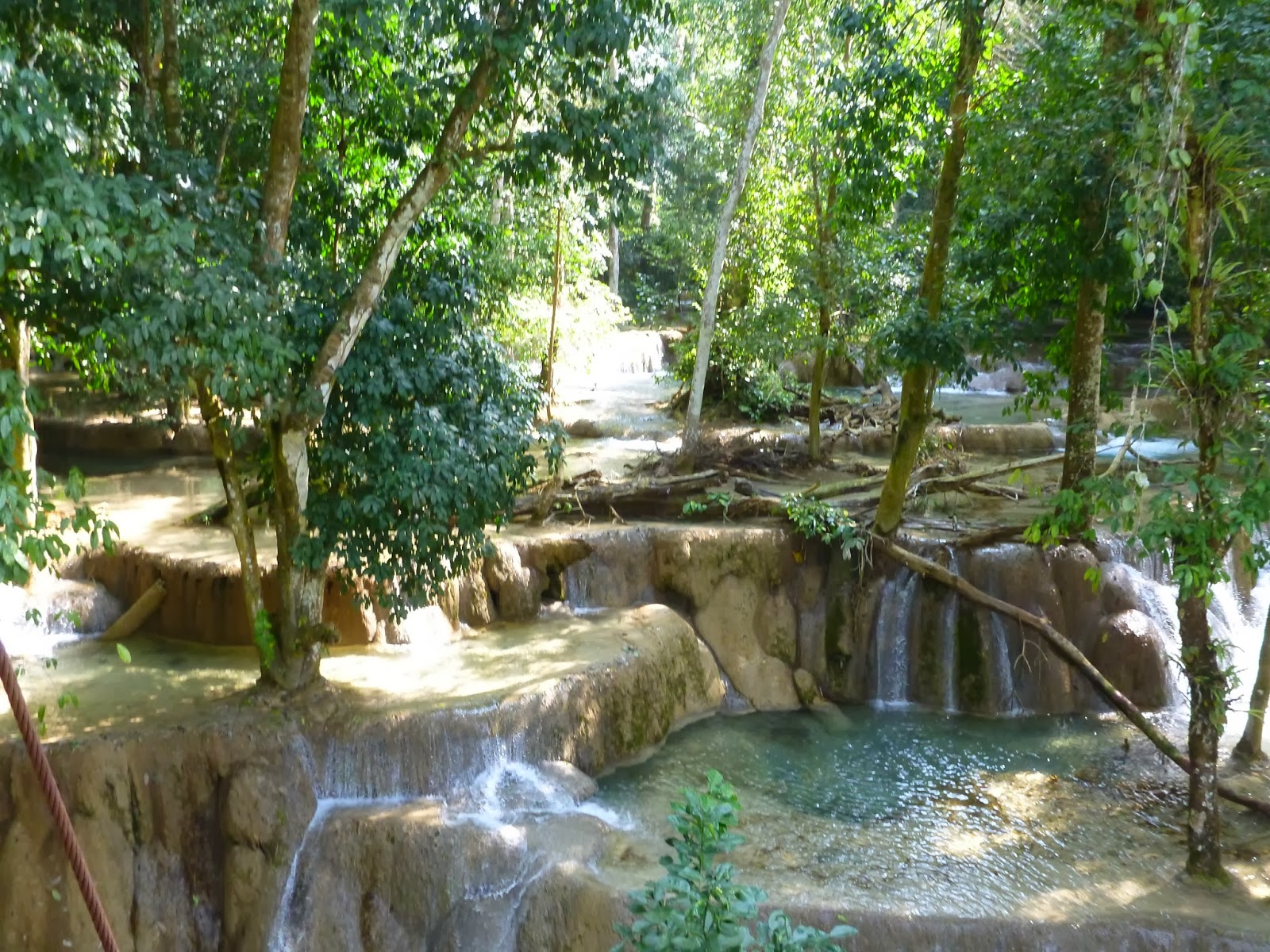 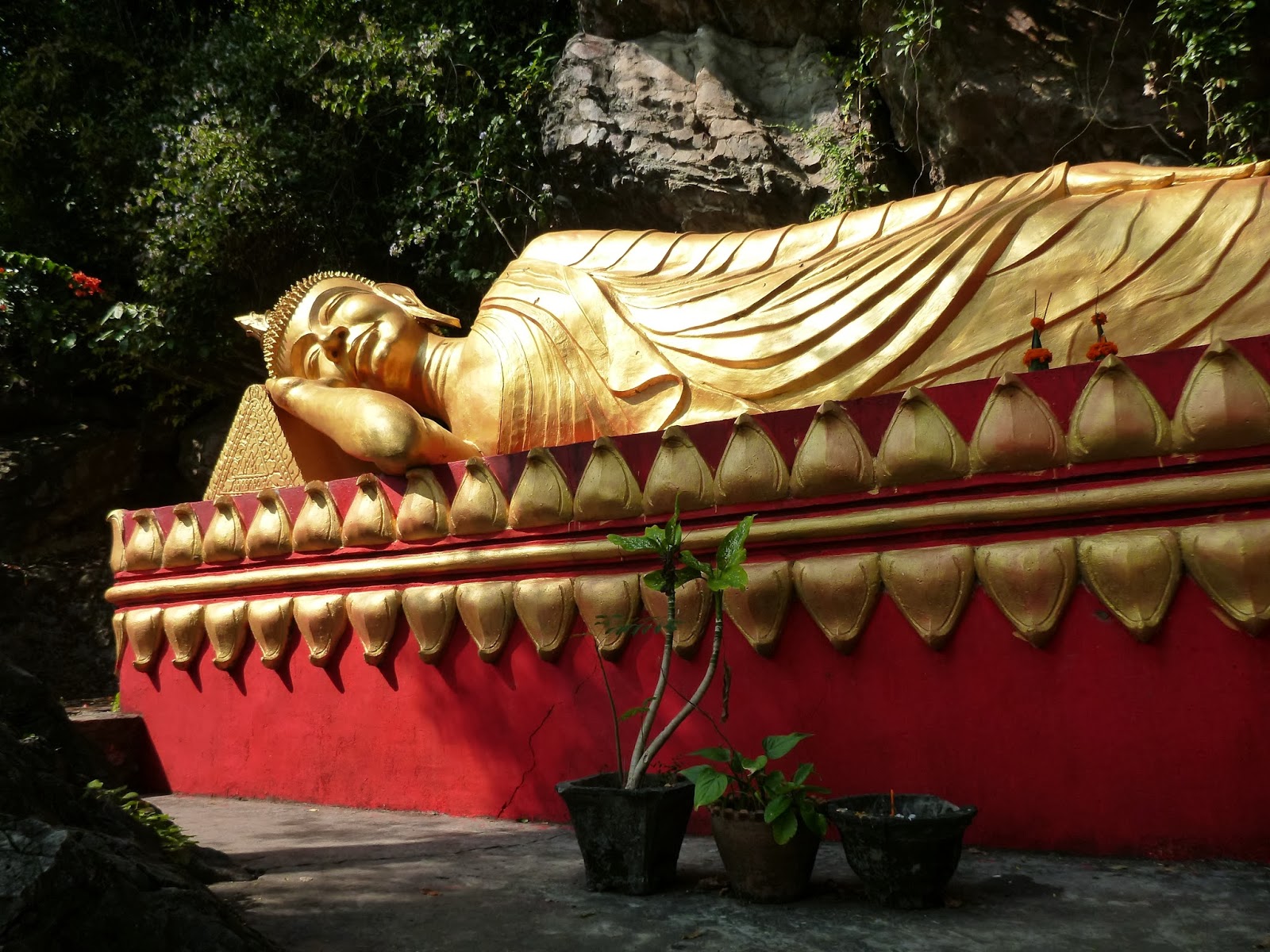 It was freezing in Laos—unusually so. The upscale hotel where we had chosen to have Christmas took pity on us and bought a space heater for our room.

After four nights in Luang Prabang we boarded a bus for the long trip to Vientiane—11 hours.  Roads are windy and slow, and there were a number of brief stops, sometimes apparently for the driver to buy fish or vegetables, and at least once to let the engine cool down. The scenery, especially in the north, was lovely though, and the ride fairly comfortable.

Vientiane is the capital as is not nearly so atmospheric as Luang Prabang but has a certain appeal. We ventured out to a “Buddha Park” some miles outside of town, 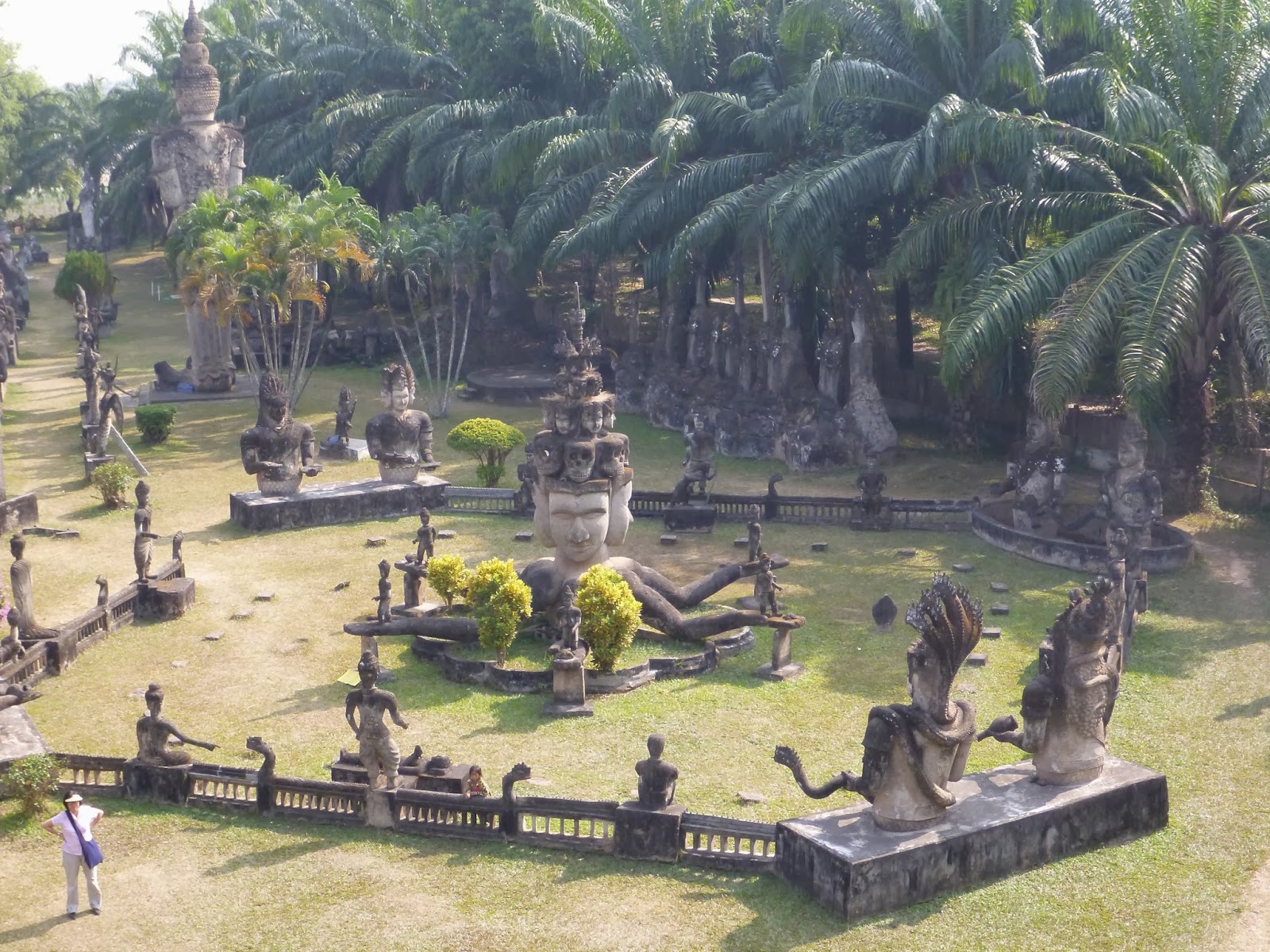 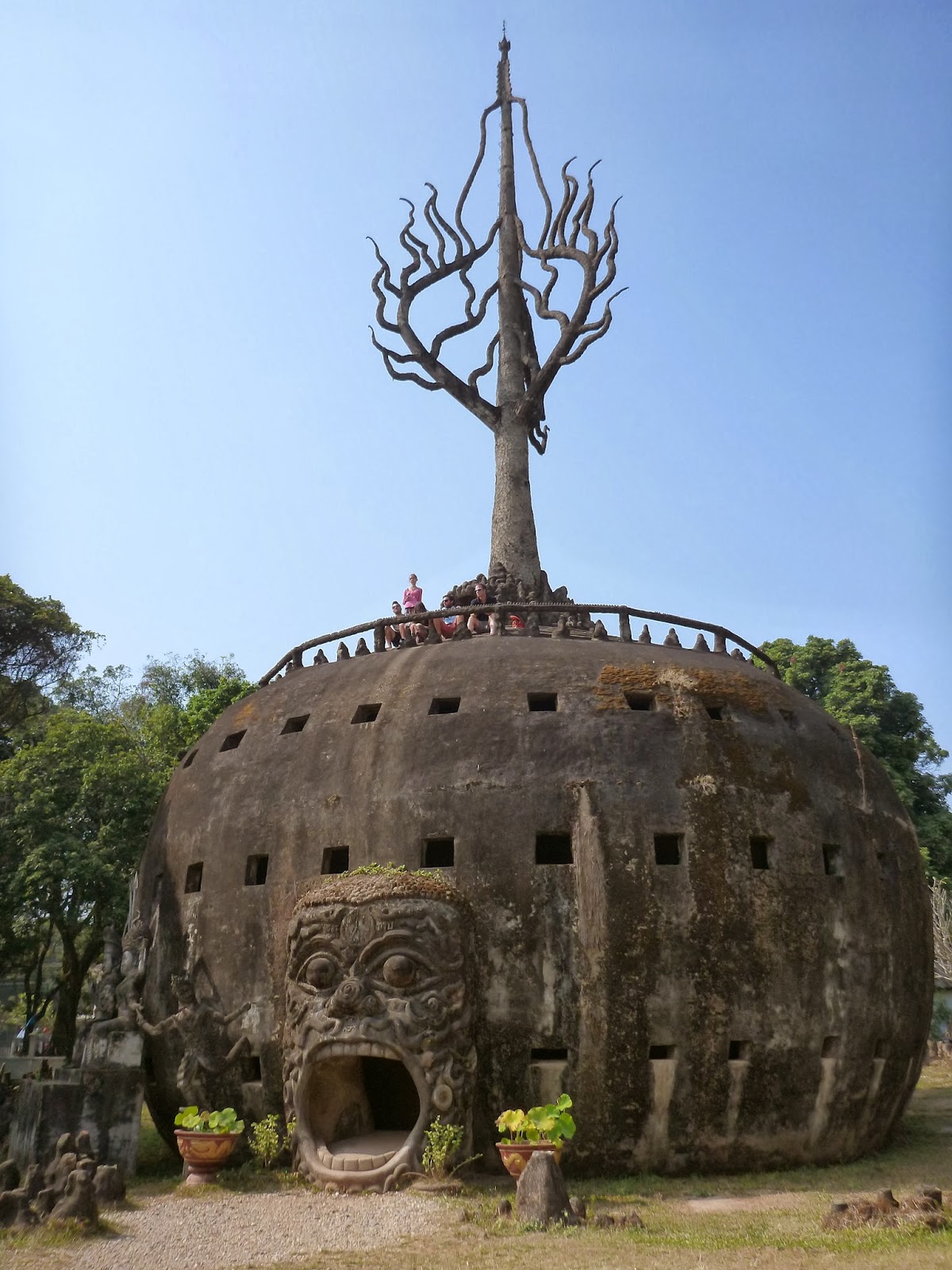 mostly traveling along the banks of the Mekong which separates Laos from Thailand.  The contrast between the two is easy to see, Thailand being far more modern, with a number of multi-storey buildings and evidence of industry, whereas the Lao side of the river had modest wooden houses and tiny shops, along a semi-paved road.

The so-called Buddha Park is a fanciful creation of statues put together by a now-departed local philanthropist. We had fun climbing inside the giant pumpkin (?).

For dinner, we had made reservations well in advance at Makphet Restaurant, excellent food prepared and served by ex-street kids who are being trained in the restaurant business.  It was a great meal and great to know how popular the place is. 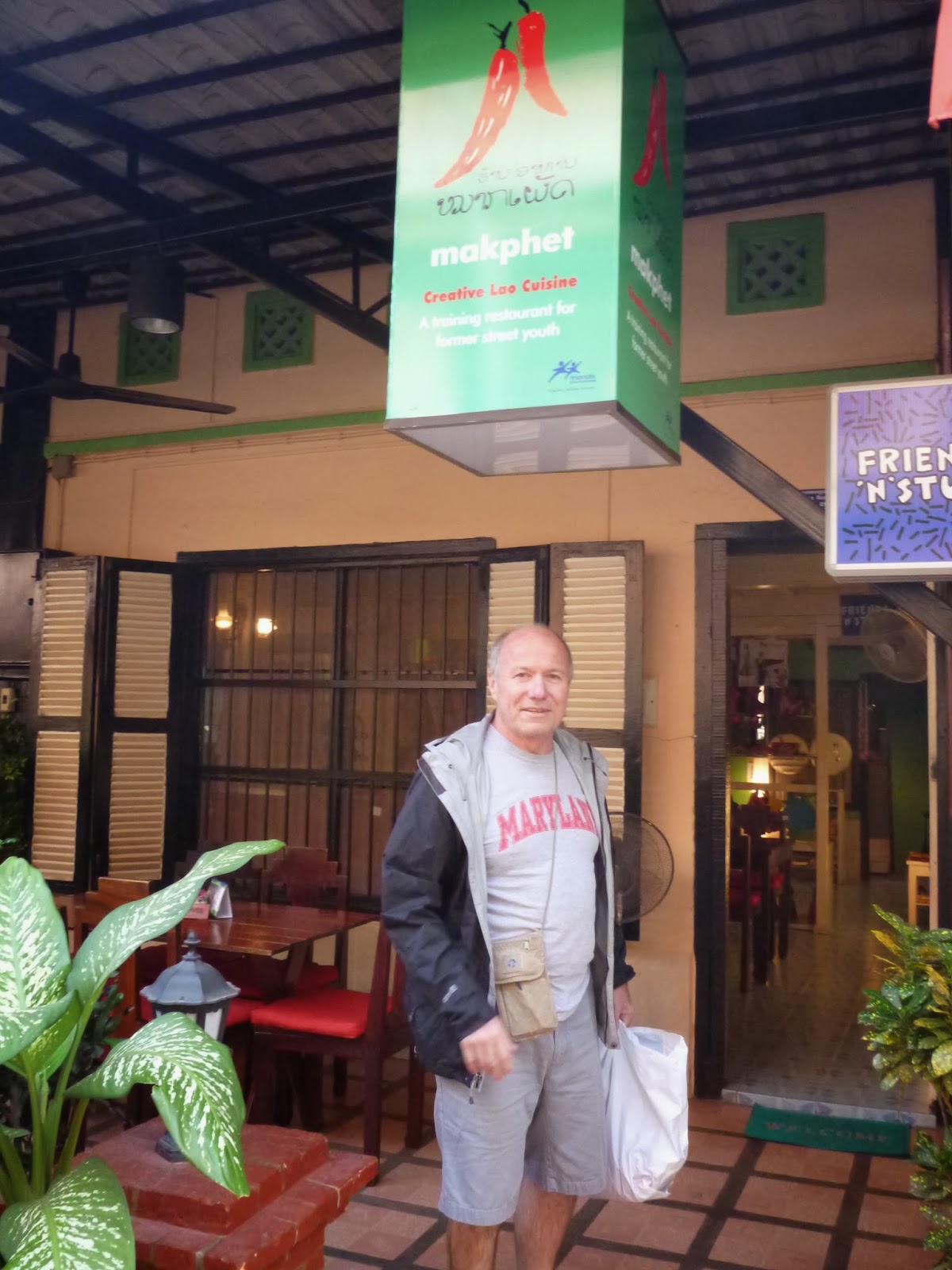 In the evening we sat by the Mekong River to watch the sun set, and were approached by ladies on bicycles offering manicures

The next morning we left Laos to travel to Penang. There was no direct flight scheduled that day so we took it in two chunks:  Vientiane to Bangkok and Bangkok to Penang. An added complication was a change of airport in Bangkok.

Cam and Ben were pleased to discover a Dairy Queen in the Vientiane airport. 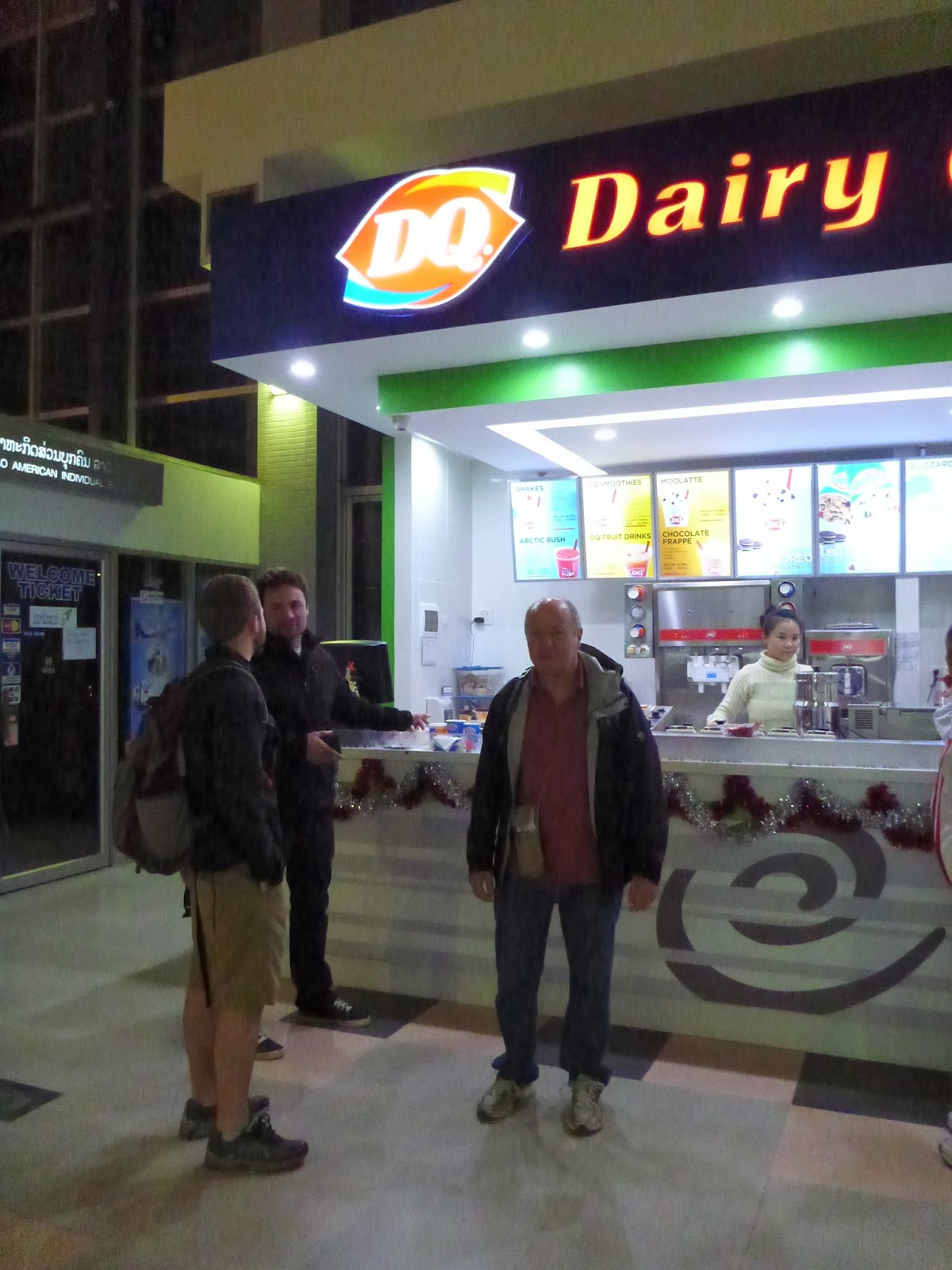 No matter that it was 6 am; they ordered Blizzards. Honestly.

It was breakfast in Laos, lunch in Thailand and dinner in Malaysia that day.

We sampled the best of what Penang has to offer in the two short days we had together here: a jungle hike, a glitzy shopping mall, and as much good food as we could manage.

Then we were off to Melaka (Malacca) in our aging Kia-wannabe vehicle.  It did well making the 7 hour journey.  We made a stop at our favorite cave temple outside Ipoh.

It was New Year’s Eve in Melaka. We broke out the Cuban cigars we’d purchased in some airport duty free or other earlier in the year, and found a simple café along the river where we were able to see fireworks punctuated by the startled swarms of small birds rousted by the noise.

The next day Ben had an evening flight out, so we made our way to Kuala Lumpur. Cam, Tom and I had one more day in KL, which seems so much less interesting than the other cities we've just visited.

Sad to see the Camster go...:-(.  Back to the unforgiving med school grind.

T and I had arranged one more night of hotel, to break up the long drive back to Penang, at a golf resort/nature sanctuary outside of Ipoh. 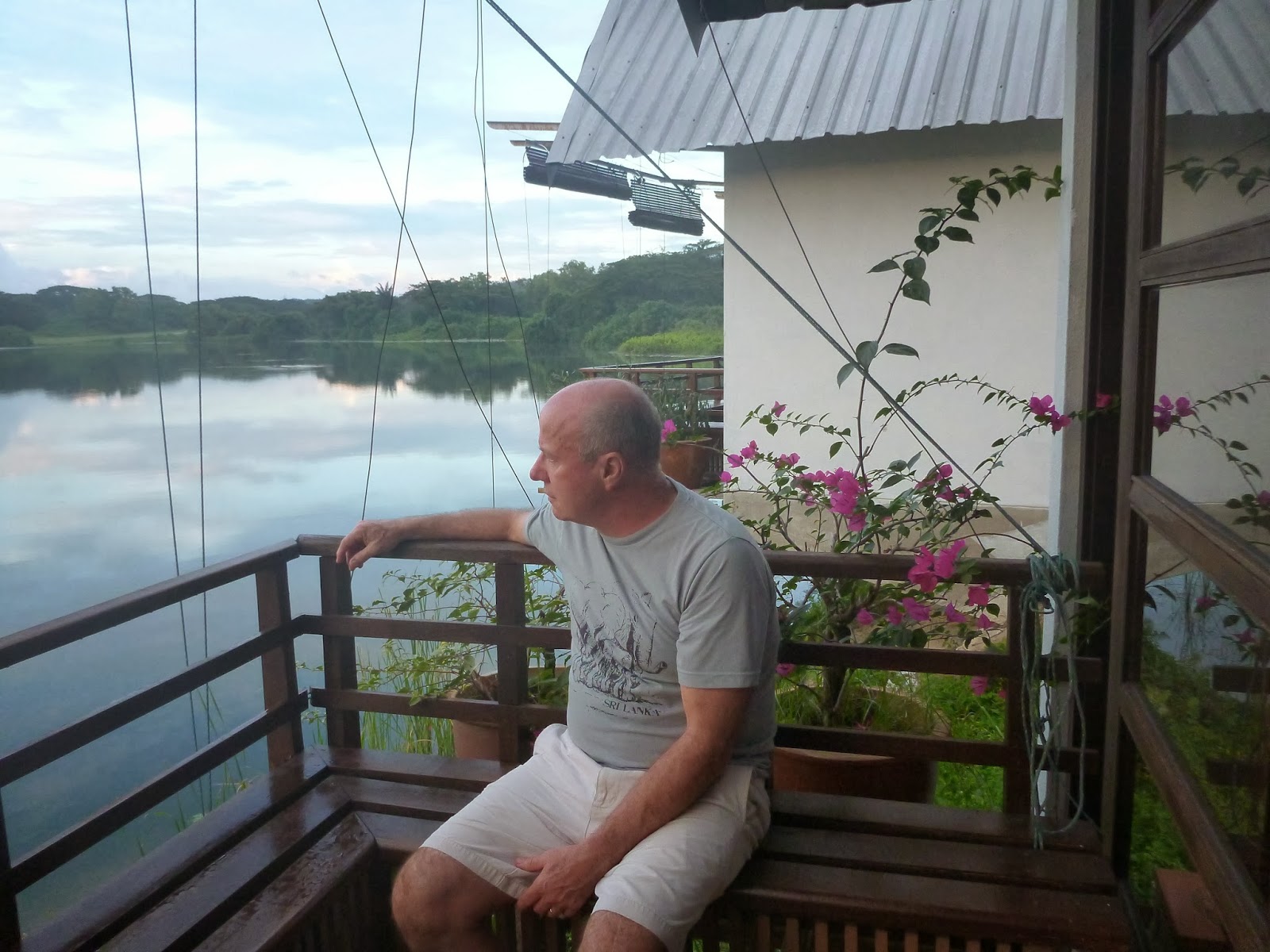 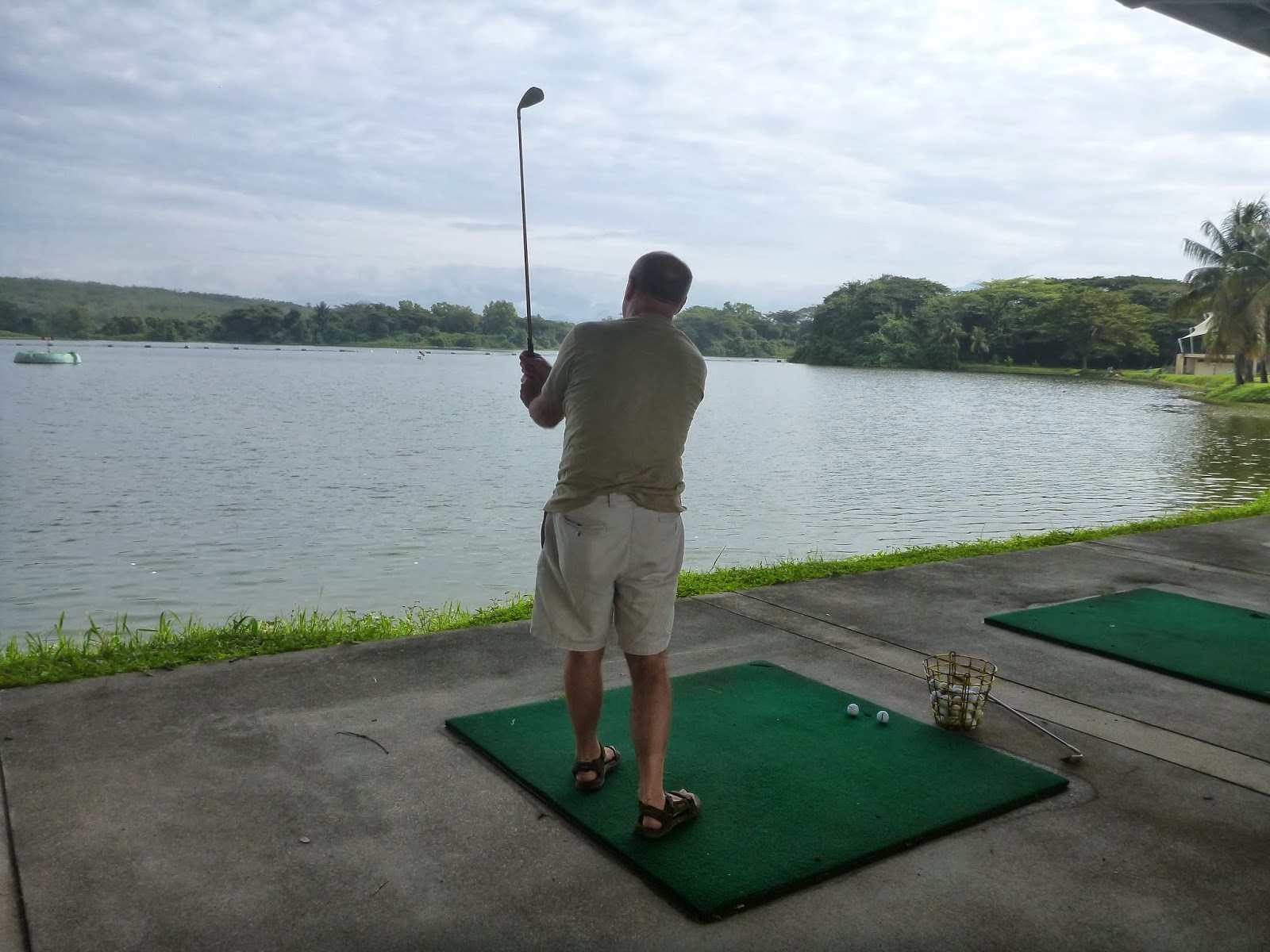 It turned out to be a lovely place--peaceful and relaxing. One free activity was included with the room. We had to choose between a fairly well-equipped gym, badminton and tennis courts, an archery lesson, a dip in the infinity pool, or a bucket of balls. Lacking gym or swim gear we chose the balls, which are launched into (and later retrieved from) the lake.

Tom and Kris(tine)
Citizens of the world, now living in Penang